It is interesting how values change. The streets of houses in West Kentish Town that planning officers now seek to protect from change through conservation area policy are the same as those the Council proposed to demolish in the 60s and 70s. There seemed good reason for demolition at the time: the buildings were run down and over-crowded, and there was a housing crisis. Compulsory purchase was the tool used to sweep away the 19th century streets in Gospel Oak and west Kentish Town. This plan from 1966 shows how the area was carved up for redevelopment, each parcel becoming a new estate: West Kentish Town estate was amongst the first, originally planned in 1957, followed by Burmarsh, Headcorn, Chislet, Southfleet, Denton and many others. This model of redevelopment continued until local people halted the destruction of Oak Village in Gospel Oak, and the positive qualities of the houses were appreciated. The Inkerman Road area was saved, along with streets such as St Leonard’s Square, Marsden Street, and parts of Bassett Street, Allcroft and Coity Roads. These buildings are now protected: the Inkerman Conservation Area was formed in 2001 and West Kentish Town Conservation Area in 2005. 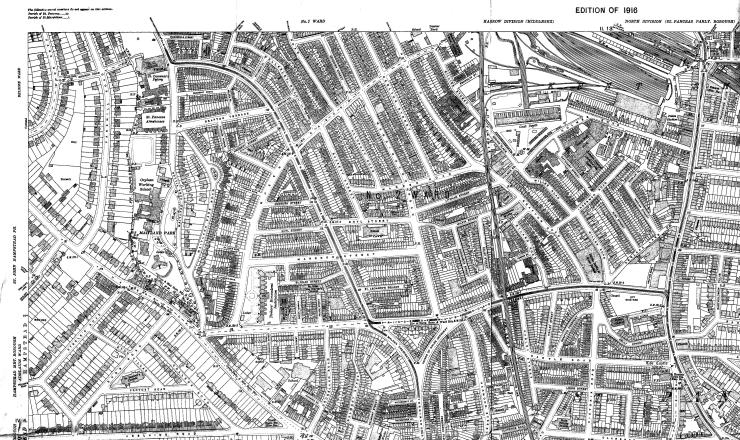 The 19th century street pattern had much to commend it: clear division of private and public space, generous streets and a good degree of connectivity, linking west Kentish Town and Gospel Oak to the surrounding areas. Terraced housing with front doors and gardens that relate to the street promotes neighbourly interaction and overlooking of public space, which helps make it safer. Dual aspect accommodation provides well-lit rooms with access to private space at the centre of enclosed urban blocks. This model can be used today in new development, as shown by the flats built by Camden at 6-60 Bassett Street in the 1970s, comprising maisonettes with individual front doors, and flats above with roof terraces.

What the 19th century urban fabric lacked however, was the provision of open space for play and recreation. The open space at Talacre was also created by the Council through the process of compulsory purchase and demolition. For the fascinating history of this community space see Talacre Gardens.

2 thoughts on “From demolition order to Conservation Area”